I love movies. I mean, we all do. Let’s write down which ones are the keepers! (Got it, Facebook overlords! Some additions for the 2014 edition later in the story. 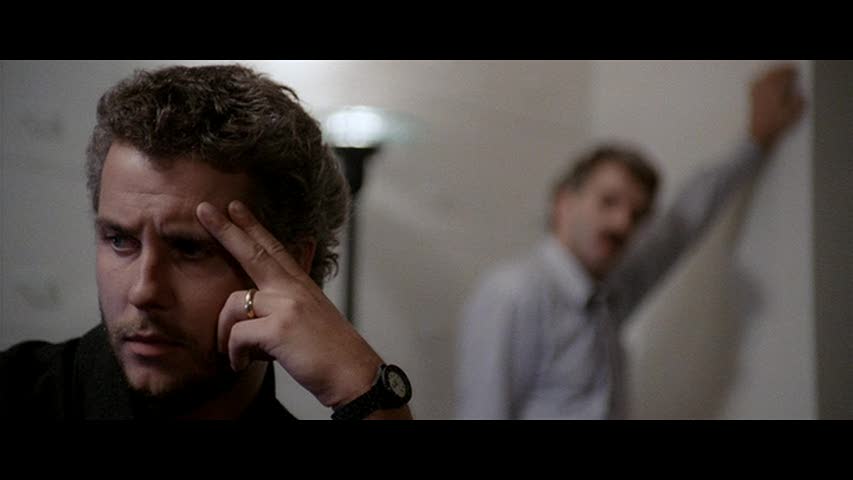 The rules: Don’t take too long to think about it. Fifteen films you’ve seen that will always stick with you. List the first fifteen you can recall in no more than fifteen minutes. Tag fifteen friends, including me, because I’m interested in seeing what films my friends choose.

1. Manhunter (pictured above, with a sexy William Petersen as Will Graham and Dennis Farina as Agent Jack Crawford) – After being asked several times what “my favourite movie” is, it’s been always been difficult to say just one. So I’ve turned to saying this movie by Michael Mann. It’s not the favourite, but it’s certainly one of my bestest. I explained more here in the original Details Later blog.

2. Miller’s Crossing – “All in all not a bad guy – if looks, brains and personality don’t count.”

3. LA Confidential – Watching this in a movie house was an almost-narcotic, out-of-body experience. (Oh gosh, they should call the cops! Wait — they are the cops!)

4. Infernal Affairs – The Departed? Not a PATCH on this movie. Also an out-of-body experience.

6. Flash Gordon – The 1980 version was one of my earliest experiences going to the movie house. I’d say it really holds up even though the model glue used to create the sets could probably be found cut off just left of frame. Plus, a zillion quotable quotes!

7. Star Wars – Because in any list of movies that you feel “sticks with you,” this movie is the stickiest.

8. Ordinary People – It’s a personal “tent pole” movie, a crucial building block of why I like the movies I like today.

12. Eternal Sunshine of the Spotless Mind – A diabolical plan by Jim Carrey to get into Karen’s 15 Movies list. (See: the “you’re pretty!” scene)

14. History of the World – These two Mel Brooks movies conjure so vividly summers/vacations with all my cousins in Cebu, and we watched these movies daily, every four hours (practically. Like it was on schedule). Many, many jokes went over our head, but we laughed anyway. “Don’t be saucy with me, Bernaise!” “Mungo only pawn in game of life.…”

15. The Up Documentary Series – Michael Apted’s every-seven-years visitation of a bunch of British kids since they were seven years old. The most recent one: 49 Up. To steal/paraphrase Roger Ebert’s line, this series best use of the film medium, in the world of the film medium. The saga of Neil, sigh. No fictional screenplay can match that. 56 Up comes out in 2012, though the kids in the movie are all: Can we quit already? You’ve been filming us since 1964!

Honorable Mentions (because there always is!):

Cinderella – Still a favourite Disney cartoon, just because the dressmaking scene with the birds and mice still ROCKS.

Heaven Can Wait – The first movie I saw on home video (Betamax!). The movie to blame for my discovery of repeat viewings

Rocky – Yeah, the sequels are not of consequence, but the original is masterpiece of great, emotional filmmaking. Without you know, saying very much.

Fame – “I Sing The Body Electric” is a movie sequence I can watch on repeat over and over. Maybe singular movie sequences should be the next list of 15…

With that parting, I suggested to Film Asgardian Quark Henares that we should get started on singular moments/sequences we’ve loved in movies. Start thinking, everyone!

I’ve seen 56 Up. With the return of Peter, all but one (come back, Charles!) are still letting us peek into their lives, all for our privilege. Would you let the world to intrude on you every seven years? Pretty much everyone is more accepting of their filmic duties. No more rebelling.

Here’s a few titles to add to the pantheon:

Seven Brides For Seven Brothers — Why wasn’t this in the list back then? My mom twisted me and my brothers’ respective arms to watch this, and she was right: this movie was a delight, and so began the shaking of our movie universes beyond Star Wars.

All Is Lost — My brain still can’t wrap around on how this movie got away with working with so little toys but created such cinematic grand architecture. There’s no backstory, practically no dialogue; a simple story of survival on the seas. It was plain entertaining, yet rich with provocative ideas. This movie made Gravity seem all technical tricks and cheap emotion, in comparison. Mr Redford, you were robbed.

A Simple Life — The idea of a young professional ending up having to care for the helper who raised him seemed like a Hallmark movie. But this Hong Kong film is unforced and buoyant, and conveys the hope of living with absolutely zero cheap sentiment. (How does Andy Lau seem to be Michael Jackson, Tom Cruise and Daniel Day-Lewis all at the same time?)

Metropolitan — As the years pass by, it’s a genuine pleasure to recall this movie with friends, and repeat all the hilarious dialogue. (“He’s a Fourier-ist!”) What else do you want to love a movie for?

Broadcast News — Aaron Sorkin, you little sh*t. This is how you blend a believable workplace romance and present the state of media with out straw man arguments and awkward propping up of your characters. A recent re-watch of this movie will show you that all the downward fears of the press… have come to pass. Sighhhhhh. (That said, I continue to watch “The Newsroom” for your excellent work on Don and Sloan.)